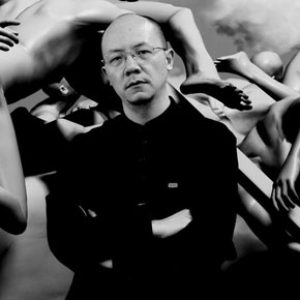 Miao Xiaochun is renowned for his photographs of contemporary China, vast cityscapes which record technological development, painting an alien view of his homeland and envisioning a new dynastic era.

In his latest body of work, The Last Judgement in Cyberspace, Miao Xiaochun appropriates Michelangelo’s Sistine Chapel fresco as territory for similar provocation. Developed on computer, Miao has built a virtual model of the Apocalypse, architecturally structuring the tiers of Christian afterlife. Replacing each of the 400 figures in Michelangelo’s iconic work with his own image and placing them in corresponding pose and position to the original painting, Miao ‘photographs’ the scene from various vantages, ‘documenting’ the Second Coming from viewpoints both within and outside of the scene.

Printed in black and white. Miao’s photos conceive the celestial as a silvery futuristic tableau that’s enchantingly serene and threateningly industrial. In combining the sublime awe of religious painting with malevolent science fiction theme, Miao uses photography to engage the viewer in an ultra-modern way. In using digital process to create his subject ‘from scratch’, Miao’s photographs authenticate a virtual world rather than document reality. Similar to video game graphics and ‘screen shots’, Miao’s images involve the viewer by casting them as ‘avatars’ within the action. Presenting his scenes at obscure angles, Miao positions the viewer as seraphs, saints, or in the case of The Below View, the damned.