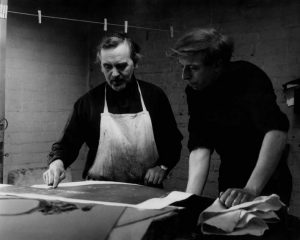 Photograph: William Scott and Stanley Jones at the Curwen Studio, 1961*

William Scott was one of the first artists in Britain, along with Patrick Heron, to develop a dialogue with America's Abstract Expressionists and to evolve this influence into an independently British movement. Although born in Scotland in 1913, he is generally held by the Irish to be one of their own, having grown up in Northern Ireland from the age of 9 and having studied at the Belfast School of Art. Scott matured into an internationally famous artist, and at the height of his career he would represent Great Britain at the Venice Biennale.

His early career was varied. Studies at the Royal Academy Schools, of both sculpture and painting, preceded travels, studies, exhibitions and the establishment of an art school in France. World War II forced him to return to England and he joined the Army, becoming a lithographic draughtsman with the Royal Engineers. After the war, he took up the position of Senior Painting Master at the Bath Academy of Art at Corsham Court. His painting, until the early 1950s was realistic in style with a preoccupation for still-life, although this soon changed. Scott travelled frequently to Cornwall where he had become friends with many of the St Ives Group of artists. He, and others from that group, was one of the sixty artists invited by the Arts Council to exhibit as part of the celebrations of the Festival of Britain. Scott’s work moved closer to non-figuration and, in 1953, an extended visit to North America resulted in friendships with New York based artists including Rothko and de Kooning.

By 1956, Scott’s success as an artist, both nationally and internationally, allowed him to give up full-time teaching, although he would remain interested in, and involved with, art school education for the rest of his life. In 1958 he represented Great Britain at the Venice Biennale, one of many occasions on which his work was chosen by the British Council to be exhibited abroad. Major shows followed in London, Tokyo, Paris, São Paulo and Zurich. In 1963 he was invited to take up the offer a 12-month residency in Berlin by the Ford Foundation.

In 1972, the Tate Gallery held a long-expected, major retrospective which cemented his fame.

*This photograph was taken in the original Curwen Studio premises by Michael Peito in 1961. At the time, William Scott (left) was in the midst of proofing ‘Mingulay’ - one of four lithographs commissioned by Timothy Simon – director of the Curwen Press and Studio. The prints were hand drawn by Scott using a combination of stone and zinc plate and were later published in 1962 in editions of 75 copies. The photograph demonstrates Scott’s involvement in the making of the four images, which were to form an important development in his printmaking.

Several rare catalogues and books about William Scott are available for sale in our bookshop.

William Scott's works are in the collections of the following museums and galleries:

Fish On A Plate - William Scott