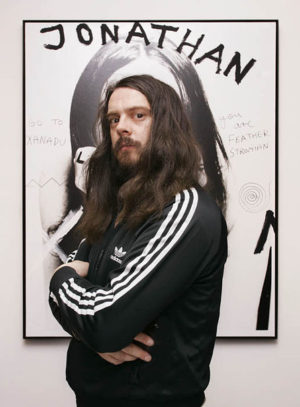 Meese attended the Hochschule für bildende Künste Hamburg, but left the school before completing his studies and was picked up by Berlin gallery Contemporary Fine Arts. An early installation Ahoi der Angst was presented at the first Berlin Biennale in 1998. Susanne Titz, writing about the Biennale said, "It was thus clear that Meese had indeed put his finger on the pulse of his generation and presented it." According to Karel Schampers, "Jonathan Meese can tell a story in such a gripping way that you would never have the idea to doubt its truth. Especially his installations benefit from this quality,"

He has been included in exhibitions “Spezialbilder” at Contemporary Fine Arts in Berlin, “Grotesk!” at Schirn Kunsthalle in Frankfurt and “Schnitt bringt Schnitte” at Ausstellungsraum Schnitt in Köln. Recent exhibitions include Thanks, Wally Whyton (Revendaddy Phantomilky on Coconut Islandaddy) at Stuart Shave/Modern Art, in London, and a performance at Tate Modern, entitled Noel Coward Is Back — Dr. Humpty Dumpty vs. Fra No-Finger.

The Museum of Contemporary Art (MOCA), North Miami presented the first major solo museum exhibition in the United States for Jonathan Meese, which included Meese's paintings that mix personal hieroglyphics and collage, installations, ecstatic performances, and a powerful body of sculptures in a variety of media. The exhibition was on view from December 1, 2010 – February 13, 2011, during Art Basel Miami Beach 2010. Jonathan Meese: Sculpture was organized by the Museum of Contemporary Art, North Miami and curated by Director and Chief Curator Bonnie Clearwater.

In 2007, he collaborated with the composer Karlheinz Essl on the installation FRÄULEIN ATLANTIS shown at the Essl Museum in Vienna/Klosterneuburg.
He is represented by Contemporary Fine Arts in Berlin, Stuart Shave/Modern Art in London and Galerie Daniel Templon in Paris.
He has worked collaboratively with the painters Jörg Immendorff, Albert Oehlen, Tim Berresheim, Daniel Richter, Tal R and the composer Karlheinz Essl.