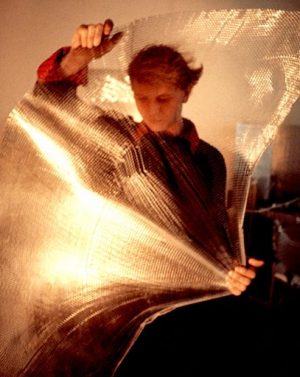 Heinz Mack is a German artist, living and working in Mönchengladbach and Ibiza. Mack's principle concern is with light, and he considers his sculptures and paintings a medium only for the transport of light. In 1957 Mack founded the ZERO Group with fellow artists Otto Piene and Günther Uecker, who stated their manifesto: 'ZERO is the beginning'. ZERO is now acknowledged as one of the most important avant-garde movements of art history of the post-war period.

Agreeing a historical and artistic point zero, the artists within the group developed innovative artistic principles as well as bold aesthetic ideas. The desire to experiment and find new materials for art and to link into an international network defined the innovative force of the ZERO artists, whose practice also reacted against Art Informel and Neo-Expressionism. Projects were ambitious and radical: Mack built a silver forest on the Rheinwiese in Düsseldorf, Günter Uecker pitched white sails there and Otto Piene sent balloons off into the night sky. The group attracted the involvement of many great colleagues from around Europe: Arman, Aubertin, Castellani, Fontana, Klein, Manzoni, Mavignier, Peeters, Salentin, Schoonhoven, Spoerri, and Tinguely all contributed work for exhibition or collaborated on projects.

In 1964 Mack, Piene and Uecker arranged the “ZERO Lichtraum (Hommage á Lucio Fontana)” at the 1964 documenta in Kassel. Following this, Mack embarked on a period of travel, living and working in New York and then becoming visiting professor to Osaka, Japan in 1970. In the same year he represented Germany at the 1970 Venice Biennale (together with Günther Uecker, Georg Karl Pfahler and Thomas Lenk) and for the 1972 Summer Olympics in Munich he created an illuminated “Wasserwolke” (Water cloud).

In 1972 he was asked to create a 230 ft tall sculpture for the United Nations headquarters in New York, although this project was never realised.

In 2008 the ZERO-Foundation was established in Düsseldorf. The Foundation contains the archives and numerous works of the artists Mack, Piene and Uecker. It is dedicated to research and supports documentations and exhibitions

Some 300 solo exhibitions include: