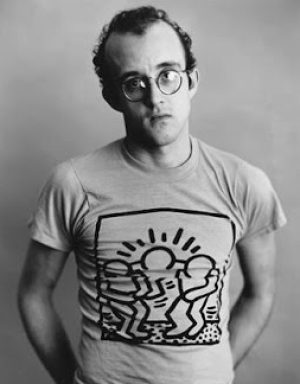 Keith Haring was an American artist, active in the 1980s in New York, who is considered to be the first 'street artist' in the sense that is now more widely understood. Haring used a visual language composed of outlined intertwining figures, objects and animals, in his graffiti and street works, often to express deeply held political and social beliefs.

Haring was born in Pittsburgh, where he would study commercial art before losing interest and taking a maintenance job at Pittsburgh Center for the Arts. There, surrounded by important works of contemporary art, he rekindled his passion and developed his style, culminating in his first one man show there in 1978.

He moved to New York, where he would become close friends with the artists Jean-Michel Basquiat, Andy Warhol, Maripol and the performer Madonna. Relatively quickly, he began to attract attention for his subway drawings and his easily recognised calligraphy, and he participated in the prestigious Whitney Biennial in 1983. He made over 50 public murals during the 1980s, becoming something of an establishment figure despite the subversive nature of his work.

Haring was concerned with breaking down the barriers between high and low art, and what work he did sell he sold cheaply, prioritising the distribution of his ideas over profit. He opened a shop, 'Pop Shop' in SoHo, and used it to further awareness about safe sex, the anti-apartheid movement and the growing epidemic of crack-cocaine use. Haring was diagnosed with AIDS in 1988, prompting him to set up a foundation tasked with increasing AIDS awareness and to spend his last years generating activism over the subject.

The artist died in 1990 at the age of only 32, leaving an enormous legacy of work and influence which continues to be widely felt. His work is held in the collections of MoMA and the Whitney Museum in New York, and the Pompidou Centre in Paris amongst many others.