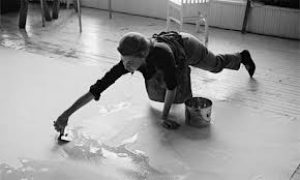 Helen Frankenthaler was an American Abstract Expressionist painter and one of the founding artists of the Color Field group of painters. Frankenthaler studied at the Dalton School under Rufino Tamayo and also at Bennington College in Vermont. In 1950, she met Clement Greenberg and began a relationship with him.

She became a contemporary and colleague of Jackson Pollock, Hans Hoffmann and Kenneth Noland and was married in 1958 to Robert Motherwell. They were known in New York society as 'The Golden Couple' on account of their fame and lavish entertaining.

Frankenthaler pioneered the process of painting directly onto unprepared canvas, a technique that became known as 'soak stain'. This technique was adopted by Jackson Pollock and then by other Color Field painters, notably Morris Louis. She was hugely influential, the worst criticism she seemed to suffer in her career was for her work to be damned “merely beautiful”, and until her death in 2011 was regarded as one of America's most important living painters.

Frankenthaler has been exhibited internationally since the early 1950s, and has had several retrospective exhibitions, including at MoMA in 1989.

Her work is held in the following collections, and over forty others: