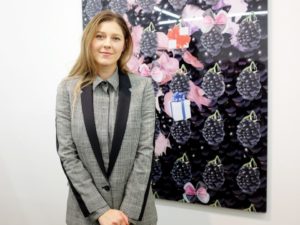 Petra Cortright (b.1986) lives and works in Los Angeles, CA.

Cortright has studied fine art at Parsons The New School of Design, NY and The California College of the Arts, CA. The artist works in video, painting and digital media. She is well known her video works presented on YouTube, and makes intricate paintings using digital software which blend figurative and abstract elements, often printed on fabrics.

In 2011 Cortright collaborated with Ilia Ovechkin to create Video Catalog, a work where the monetary value of her videos was determined by an algorithm based on YouTube views. She was selected to participate in the 2013 Frieze Art Fair in London where she produced her self-portrait, Bridal Shower (2013), a film where she experiments with the physical qualities of a production studio. The film was subsequently broadcast on British public television station Channel 4.

In 2014, Cortright began a collaboration with fashion designer Stella McCartney, creating a series of videos where the artist uses glitches and video manipulation to showcase and contrast patterns on the garments designed by McCartney.

Her work as been profiled in the New York Times, Forbes, Cambridge and New York: MIT Press and the New Museum, W Magazine, Artforum, The Guardian, Flaunt Magazine and many others.