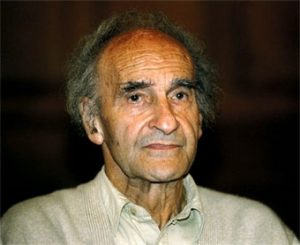 The Spanish sculptor Eduardo Chillida was born in San Sebastian in the Basque country. In 1943 Chillida began to study architecture, but soon dropped out.

In 1947 he registered at the private art academy "Circulo de Bellas Artes" in Madrid, where he initially focused on working with gypsum and clay. His first sculptures were received well by the critics. In 1949 Eduardo Chillida began working on iron sculptures during a sojourn to Paris. Upon his return from Paris Eduardo Chillida settled in the Spanish town of Hernani, where he produced his abstract sculpture "Llarik" in 1950. This sculpture reflected his views on sculptural art, with the space being the focus of attention.

During the following years this idea of the limitations of space permeated his sculptural oeuvre more and more. His graphic art also reflects parallels. Eduardo Chillida became a renowned sculptor and graphic artist. Alongside numerous international exhibitions, his works were presented at several "documenta" exhibitions and Biennales.
In 1958 he was awarded the Grand Prize for Sculpture at the Venice Biennale. Two years later he received the Kandinsky-Prize. Further international awards followed. In 1980 the New York Guggenheim Museum showed a retrospective of his oeuvre.

Eduardo Chillida spent the last few years of his artistic career in San Sebastián. With his oeuvre Chillida became one of the most important sculptors, who produced their objects in a concrete style. The homogeneous material and the division into figure shapes is characteristic of his sculptural work.