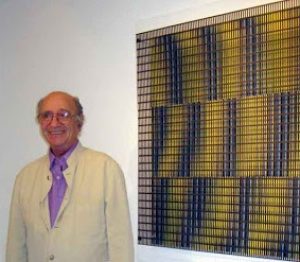 Antonio Asis (b.1932) is an Argentinian artist and an early exponent of Op and Kinetic art. Having studied in Buenos Aires under Héctor Cartier, Asis quickly became disillusioned with concrete art and what he perceived as its intellectual limitations.

Moving to Paris in 1956, Asis immediately encountered the work of Victor Vasarely, Jesús Rafael Soto and Pol Bury, all pioneers of Op Art and whose early experiments would model the complex visual realities that he sought to achieve in his own work. In 1971, Asis co-founded Position, and artists group which included Hugo Demarco and Horacio Garcia Rossi. They were all Argentinian artists, all living in Paris, and all interested in movement and the vibrations of light.

Asis' work was presented at the Paris Biennale in 1967, and is included in the Collection Ella Fontanals Cisneros and the Museum of Fine Arts in Houston, amongst others.